New Layout and features for Swydo

Today we put live a new layout and some great new features.

The former layout wasn’t bad, but there is always room for improvement. We thought the layout could become even a little bit cleaner and more focussed. Also the screen width wasn’t always optimal for different screen resolutions.

So here’s the update:

We got rid of the grey background, introduced the black main menu and new tabs in the company context. Also some unnecessary lines etc. have been removed. We like it internally a lot and already got positive feedback from users.

The new features include Bulk task closure, direct adding of tasks to projects and removal of the TinyMCE editor.

In the past you could have the situation that you did not close tasks and these could, when they did not have a deadline, go below the radar. They did not show up in your widgets. This is not a big problem but a lot of open tasks is a bit sloppy and manually closing these old task one by one is time-consuming. No we got this great new feature ” bulk task closure”. You go to a project or subscription and with 2 clicks you can close old tasks! 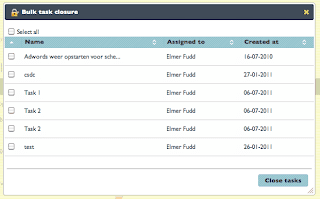 Other new features:
You can now add a task directly from a project or subscription screen. You could already add tasks via the widgets or via the tasks menu, but we saw the need to be able to do this directly too.

The TinyMCE editor gave you the possibility to add bullets in the task comments etc. but we saw nobody used that and to be honest: Why not keep it simple. So we removed it.

So this new release is a major step towards further simplicity and cleanliness. Next release is scheduled for the end of july and will include Google Analytics integration!