Better worksheet in Swydo and subscriptions are gone (sort of)

Blog » Better worksheet in Swydo and subscriptions are gone (sort of)

Today we implemented some improvements in the Worksheet in Swydo. We improved some small user interface stuff, but the important change is we dropped the ‘subscription’ , sort of. We always had a lot of debate within Swydo on the difference between a project and a subscription. To me a project has a start and an end date. A subscription based service, like “Google Adwords Management’  is an ongoing service, at least for a couple of months, that your perform.

In a project one is interested in the progress measured against the total, while in a subscription one is interested in progress on a monthly basis. I always thought that was a vital difference and a real usp of Swydo in comparison with current PM tools that you could differentiate between aproject and a subscription. But the term subscription could lead to confusion. So we dropped it, but not really. Now you ca add a project, but when you do that we ask if it is an ongoing or non recurring project. When you choose ongoing, than we measure the progress against the monthly measure. When you choose non recurring, that its basically a project. 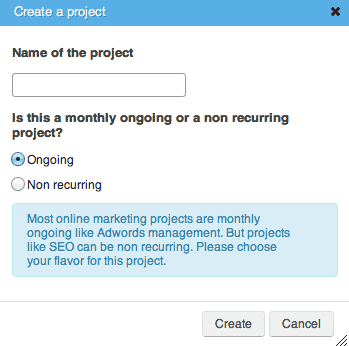 We feel that with this change we made the User Interface cleaner, easier and we think more users will use the power of subscriptions, eeeehhhhh, ongoing projects I mean.